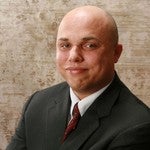 After obtaining my law degree I worked as an associate at Goodwin Procter LLP as a complex commercial litigator working for our nation's largest companies. I then took my talents to the District Attorney's office in New York City. After prosecuting thousands of cases in New York City, I accepted a position as an Assistant District Attorney (ADA) with the District Attorney's office in Boston working in the Dorchester District Court and then as the Supervising ADA at the South Boston District Court.  I then worked as a New Hampshire State Police Prosecutor.

I then took my experiences from my time as a U.S. Marine, Attorney at Goodwin Procter, ADA in two of our nation's largest cities, and the New Hampshire State Police to start The Law Office of David Newton, which is dedicated to personalized attention to every client and aggressive, but smart, legal representation.

I specialize in bringing the law to your corner. We are dedicated to understanding what results you want and to helping you understand what actions we can take on your behalf. We will work with you every step of the way to make sure that you understand the choices you are making and feel empowered to make them.

Thank you for contacting us. We will get back to you shortly.

Please complete all required fields below.

Let My Experience Be Your Peace Of Mind